This time, having the Res Artis General Meeting, an international conference of Artist-in-Residence (AIR) as a theme, I would like to consider another social context in which AIR takes place. In the first half of the article, I will introduce the session in which I participated, and then in the latter half, I will explore the possibilities of AIR from the perspective of social mobility★1.

In the evening session on October 28, “Session 14: Cultural Policy on Creative Platform,” three presenters were invited to speak. The first was Sarah Gardner, Executive Director of the International Federation of Arts Councils and Culture Agencies (IFACCA), which connects art promotion organizations around the world. The second was Anupama Sekhar, Acting Deputy Director for Cultural Exchange at the Asia-Europe Foundation (ASEF), which contributes to promoting cultural exchanges between Asia and Europe. And the final speaker was Junya Nakano, Director at the Office for International Cultural Exchange, Agency for Cultural Affairs, Government of Japan. Within a limited amount of time, each speaker made a 15-minute presentation.
First, Ms. Gardner gave us an outline of the IFACCA and the research it has been conducting. The IFACCA was founded in December 2000 with the purpose of establishing a global network of arts promotion organizations represented by national arts councils. It currently consists of 72 national organizations and 47 equivalent organizations. She then went on to speak about the “WorldCP Project,” which is one of IFACCA’s major activities. Basically, it is a project to document individual countries’ cultural policies in detail and use this resource as common information infrastructure★2. It has already covered 42 countries in Europe and is currently profiling the cultural policies of Asian countries including South Korea and Singapore. She then briefly introduced the details of research conducted by IFACCA. In this article, I will not mention further for this research as well as the after-mentioned presentation by Ms. Sekhar, because both the IFACCA and the ASEF have released the research reports on their websites. Therefore, please visit each organization’s website if you want to know more★3. Among the research results presented, what I want to pay attention to is the difficulty of evaluating AIR subsidy projects, as pointed out in the conclusion of the presentation. Ms. Gardner said the difficult aspect is the issues of its “impact” and the “time lag” until the “impact” comes to the surface. Although the purport of this session is not the “project evaluation,” I would like to discuss it later partly because it was one of the themes that ran through the entire Res Artis meeting. 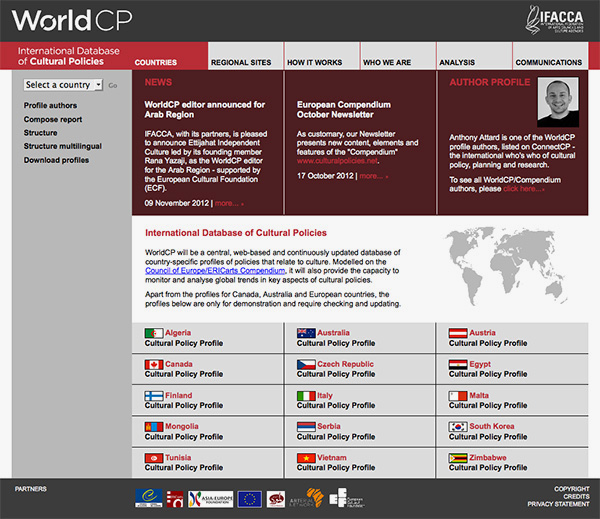 While Ms. Gardner paid relevant attention to state-level support, partly because she comes from the Australia Council for the Arts, Ms. Sekhar, the second speaker, made a presentation from a “local/global” perspective. As a member of the Cultural Exchange section at the Asia-Europe Foundation, she pointed out that the current objectives are (1) to fill in the gap resulting from a lack of comprehensive information that is accessible to everyone in promoting cultural exchanges between Asia and Europe; and (2) to improve the mobility of artists between Asia and Europe (especially from Asia). The subject of the research she introduced was cultural exchange projects between Asia and Europe, and she then proceeded to a discussion, categorizing these projects into two types of subsidy system: One that is open to artists in all countries including Asia and other limited to Asian artists. In the former category, scholarships for AIR and artists ranked the highest of all public subsidies (state and international levels), while in the case of private sectors (foundations, NPOs, etc.), many of them offered project-based subsidies, and these for AIR programs, which are often longer-term, were ranked second. Furthermore, she revealed that there was an imbalance among nations both at state and city levels. Next, with regard to subsidies limited to Asia, she pointed out that public organizations had the same tendency as the former category, while the ratio of the U.S.’s private subsidies was relatively high. It was impressive that even in the conclusion part, she again referred to the imbalance among nations in the aspects of both budget and opportunity in AIR subsidies. Especially in Asia, the opportunities are still limited to South Korea and Japan, though there is increasing awareness and participation in India and China★4.
The final presenter was Junya Nakano from the Agency for Cultural Affairs. In his presentation he showcased the vision of the Agency for Cultural Affairs for AIR subsidies rather than give a presentation based on the above-mentioned research. At the beginning, he referred to the two policy directions of the Agency for Cultural Affairs. One is that the government should promote supporting activities for arts, which it is difficult to continuously foster on a non-commercial basis, and as a part of this stance, support for AIR should be considered. The other one is positioning AIR in the framework of promoting (international) cultural exchange. As specific measures, he introduced capacity building as a ground for fostering arts and the creation of a “cultural/creative city.” As for the latter, he said that a project between China, South Korea and Japan to form the “East Asian Cultural City” starting from 2014 has been already underway. On that basis, the Agency for Cultural Affairs has begun providing support to AIR since 2011 and is currently subsidizing 24 programs. This support program is a time-limited measure of five years, and the pros and cons of continuing it will be judged through evaluation. He also listed several things as the government’s purposes of providing support to AIR programs. The first one is the possibility that new arts created through the experiences of Japanese culture will also contribute to the development of arts throughout the world. The second is to produce a good cycle in Japan’s art scene through collaboration between artists active internationally and those working in Japan. The third one is to develop and promote local communities through residence programs. Mr. Nakano also referred to the ripple effects of AIR and the difficulty of its evaluation in his conclusion. Furthermore, as the government official in charge, he emphasized the importance of public relations to convey the significance of AIR.

For reasons of the length limit, I will skip the report on the Q&A in this article and look back on this whole session.
First of all, given the purport of “Cultural Policy on a Creative Platform,” the content of the session slightly disappointed me. Admittedly, all three presenters were able to provide material to examine the environment surrounding the current AIR program, and they shared awareness of the lack of a comprehensive information platform to support AIR. Considering these, perhaps I should express some satisfaction with the session.
On the other hand, I wonder if it was insufficient that the discussions did not reach to measures utilizing the above-mentioned data because the session theme was not the “current status of each country’s support for AIR and its problems.” For example, considering the composition of the three presenters, if based on the specific data provided by Ms. Gardner and Ms. Sekhar, the discussions could have been expanded with Mr. Nakano to the point of looking at what kinds of specific measures could be adopted in Japan; the session could have achieved more specific results.
In that sense also, I think that the important point raised by this session was the issue of artists’ “mobility,” a point which Ms. Sekhar emphasized. In other words, it is the standpoint of understanding AIR as a system to support the global movement of “artists/people” rather than “arts/goods.” Because I am originally familiar with the sociology of “art world” rather than cultural policies, I have taken a slightly critical stance against narrowly- defined “cultural policies” and “support for arts and culture” thus far. This is because with regard to public subsidies in particular, I feel that as long as the current Japanese tax system continues, it is difficult to obtain social understanding about preferentially pumping tax money into “culture,” especially “arts (AIR in this case)” as compared to the themes that can easily gain consensus, including “education” and “health care.” And it is a different level of discussion from the fact that I personally recognize the social significance of “arts and culture.”
However, I felt that the issue of mobility of “young (with little actual results)” “artists” in “areas other than Europe and the United States” that Ms. Sekhar referred to in her presentation could pave the way for evaluating “AIR” in the framework of problems faced by “modern society,” away from “arts and culture.” That is because in recent times, people’s mobility has remained to be an aspect embodying the multi-layered structure of power that is socially imposed on an individual. For example, business persons and researchers in advanced countries in Europe and the United States can freely come and go between countries, while migrant workers from Islamic countries in Asia are still subject to strict immigrations rules by many countries. This strongly reflects social signs that individual people are forced to bear, such as ethnicity, religion and class—basically the mobility of people who bear the signs of social minorities has been restricted★5. As for me, I do not want to stereotype “Asian artists” as “social minorities.” However, as pointed out by Ms. Sekhar, their social position is certainly relatively low, and their movement is restricted compared with curators and artists in Europe and the United States. Consequently, if a country or city can provide many AIR programs covering even Asian artists, that will be probably evaluated as a benchmark of society’s “tolerance of mobility.”
This is because as apprehended by Ms. Gardner and Mr. Nakano, it is considerably difficult to spread AIR’s evaluation and social value as a “cultural project.” At present when it is even hard to assess international exhibitions, it is nearly impossible to reveal an economic evaluation of AIR, which is operated on a small-scale community basis. If so, I guess it will be appropriate to see AIR itself as a benchmark of a society’s openness to social minorities. In particular, for Japan, which still implements strict immigration policies, except for a few specific professions, such as nurses, if the country attempts to accept people from a wider range of cultural backgrounds beginning with the area of arts and culture, and uses their works and collaboration with communities as the results, it can promote understanding of social mobility in various other areas and therefore make it possible to easily obtain consent as a pretext in the government agency. And I think that such a turnaround in attaching a social meaning will provide a chance to position AIR as a creative platform of “cultural policies” in a broad sense rather than as narrowly defined “cultural policies.”

★1──Res Artis General Meeting 2012 Tokyo, “Session 14: Cultural Policy on Creative Platform” (Tokyo Women’s Plaza, 5:00 p.m.-6:00 p.m. October 27, 2012) URL＝http://www.resartis2012tokyo.com/en/index.html
★2──WorldCP: International Database of Cultural Policies URL＝http://www.worldcp.org/index.php
★3──URLs are as below
IFACCA URL＝http://www.ifacca.org/
ASEF URL＝http://www.asef.org/
★4──”Funding opportunities for international cultural exchange in Asia: Mobility Funding Guides published” URL＝http://culture360.org/asef-news/mobility/
★5──I, as the author, do not think that “minorities” is a given substantial category , but also find it difficult to deny the presence of groups of people who are given social labels including religion, race and occupation and are therefore subject to restrictions in their mobility. To indicate these groups, I borrow the term “social minority” in this article for descriptive purposes. Therefore, I stress that I do not consider AIR and people who are engaged in AIR as “minorities” here.