The Res Artis General Meeting was held in Tokyo in October 2012. Res Artis is a worldwide network of artist residencies, based in the Netherlands, and holds general meetings every other year in worldwide locations. In conjunction with the General Meeting, about 20 presentations and sessions were run for four days. In this article, I will make a report on one of these sessions: Session 3 “Microresidency, Artist-run Residency★1.”

“Microresidence” is a term advocated by Tatsuhiko Murata, one of the panelists for this session, and is still far from being a commonly used term. According to Murata, this term derives from comments on the Youkobo Art Space (hereinafter, Youkobo), an artist-in-residence program managed by Murata, by artists who were staying at Youkobo in 2005. Murata defines the characteristics of a microresidence as small scale (in terms of both budget and facilities); artist-run or a grass-roots program independent from government sponsorship; highly flexible; placing highest priority on the support for artists and the special care of human relationships★2. I strongly sympathize with Murata’s activities, since CAAK, Center for Art & Architecture, Kanazawa, a non-profit private organization where I am a board member, also manages an artist-in-residence program that exactly falls under the definition of microresidence. However, at present, typical artist-in-residence facilities that we think of are public facilities such as ACAC Aomori Contemporary Art Centre, ARCUS Project, Tokyo Wonder Site and Akiyoshidai International Art Village. Under such circumstances, it is the remarkable step that a microresidence was picked as one of the topics of the Res Artis General Meeting where people involved in artist-in-residence programs gather from all over the world.
Youkobo became a member of Res Artis in 2001, and Murata, after serving as its board member, is currently the Vice President. He was appointed to the current position because his contribution not only to the management of Youkobo but also to the development of international networks has been well evaluated within Res Artis. In fact, many of the presenters for this session are closely related to Murata. Among the six presenters, excluding Murata and moderator Machiko Harada, Anat Litwin, Francisco Guevara and Julie Upmeyer are artists and organizers staying in Youkobo at the time of the meeting. Four days later, almost the same members held a talk and discussion session on microresidences at Youkobo, though sadly I couldn’t attend★3.

Challenges due to the Small Scale

The session started with Murata’s explanation on the concept of microresidences, and then each presenter introduced the activities he or she is engaged in. According to Murata, roughly a quarter of about 400 member organizations of Res Artis are microresidences. In 2011, they conducted a survey on microresidences targeted at 164 facilities including non-members of Res Artis and released an interim report in June 2012★4.
The first presenter Anat Litwin introduced the “HomeBase Project” that she founded and serves as the Artistic Director for. The project run by five members including Litwin aims at creating temporary “homes” in communities. It started in New York, and is now also operated in Berlin and Jerusalem.
The next presenter was Francisco Guevara, Executive Director of Arquetopia, Mexico. He introduced his activities and told the audience that its sustainability depends on infrastructure such as facilities rather than funds, and on operation within local communities.
The next presenter was Hisashi Shibata, Director of NPO S-AIR, Sapporo. He said that he does not stick to microresidences particularly and does not mind collaborating with public sectors. He sympathizes with microresidences in that he seeks independence even when collaborating with the public sector. Some themes such as Ainu are difficult for public programs to deal with, but these could become possible with through the involvement of foreign artists.
Then, Jay Koh, an artist and curator working in Europe and Asia, illustrated the conceptual framework surrounding microresidences, explaining concepts such as “Public Participative Art,” “Resource Building,” “Conversation with the Self/Conversation with Others,” “Advocacy, Research, Evaluation” and “Negotiation as Experimental Knowing.”
Next, Julie Upmeyer introduced Caravansarai in Istanbul where she serves as the Co-Director. Caravansarai uses a building in the commercial district that was once a hardware store. She insisted that she only wanted to utilize and work in the building, but it is not a community project.
Finally, Mami Odai introduced the Artist-in-Residence programs at KYOTO-Machiya and Meirin AIR in Tottori, and explained how artists and residences should be matched based on her own experiences.
The panel discussion progressed with each presenter expressing opinions based on his/her own experiences mainly about the common challenges of microresidences. One issue that came up was how they balance their activities as an artist and as an operator of microresidences. It is true that a small scale inevitably requires extra work to deal with residents. However, it can be interpreted that hosts also gain much from the family-like relationship with the artists they are living with. Shibata of S-AIR said that the residence is regarded successful if it can drive changes in the lives of both residents and hosts. Upmeyer, who lives and creates in Caravansarai, said that she, as an artist, is also influenced by other resident artists. However, in my opinion, the task on each person can be reduced by increasing the number of staff, even in small facilities in terms of budget and size. When I stayed at a small residence in Seoul★5 for a few days, I only needed to tell my hosts the places I wanted to visit and the people I wanted to meet, then they made all arrangements and different members drove and accompanied me every day. Thanks to those members my residence was very fulfilling. This may be a special case, but we can develop similar systems by building up a strong network in the local community. I also think that labor needed for facility maintenance should be minimized in order to reduce the operational task. For example, Youkobo was founded on a site that used to be a sanatorium run by Murata’s father for Tuberculosis patients. Such a home-stay-like system requires less money and less maintenance. In the case of Caravansarai, too, initiators offer part of their production spaces to other artists. Otherwise, artists would need to spend much more time applying for grants or earning money in order to pay the rent that is very high in a big city. In that respect, there seems to be a greater potential for microresidences in local cities and rural areas where the rent is lower. 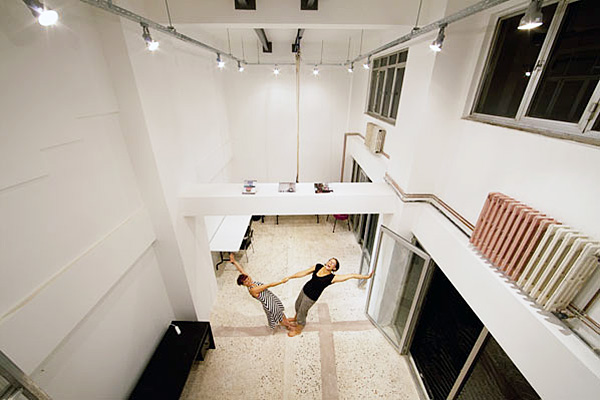 In addition, there is another challenge for microresidences that I found, though it was not dealt with in the panel discussion. That is, they are often not visible enough to artists who look for suitable residences, because of their low profile. Information on artist-in-residence programs spreads partially through artists who have stayed at the specific residence, therefore, facilities that can accommodate many artists at once such as Tokyo Wonder Site, for example, have advantages with respect to publicity. If a residence can accommodate a greater number of artists at one time, artists are more likely to be accepted, therefore the residence attracts more attention. On the other hand, such effects cannot be expected in the case of microresidences, so it would be important for them to publicize their activities through registration in artist-in-residence databases such as AIR_J and collaboration with other residences. CAAK also operates an artist-in-residence program which falls under the category of microresidence, and after its registration in AIR_J, the inquiries from artists have increased dramatically. S-AIR has succeeded in accepting artists from many countries★6. In this regard, Shibata pointed out at a different session★7 that “a person who runs an artist-in-residence is less likely to visit other resident facilities.” This remark was impressive since it’s also the case with myself. Such steady efforts toward network development are essential.

Masao Katayama, Managing Director of the Saison Foundation, stated in the greeting posted on the booklet of the General Meeting in Tokyo, that “Our history provides many examples of traveling painters and men of letters being hosted for periods of time by wealthy merchants and farmers or at temples and shrines★8.” Any artist can immediately initiate a microresidence by opening a portion of their space for art, for production and/or for living to another. Microresidences can produce greater results than government-led residences, if they can minimize the labor required for facility maintenance; strengthen the network with local collaborators; promote global networking among residences; and deliver information to the artists who want to take part. Microresidences as a group have the potential to become a source of dialogue and creativity.