The 12th General Meeting of Res Artis (*1), a worldwide network of artist residencies, was held in Montreal, Quebec, Canada for five days from October 6 (Wed.) to 10 (Sun.) in 2010. Under the theme of “The Americas: Independent Artistic Practices in the Era of Globalization,” a wide variety of AIR (artist-in-residence) programs were introduced and discussed, and topics focusing on the American continent including Latin America were highlighted.
The Res Artis general meeting was hosted by RCAAQ (Regroupement des centres d’artistes autogeres du Quebec), a Quebec-based organization that provides support to artist-led art-space activities across Canada. Canada has abundant artist-run organizations known for their very active programs, of which RCAAQ is a model.
The host city, Montreal, is Canada’s second largest city after Toronto. It has a population of about 3.7 million, and two thirds of its citizens speak French as their first language. Renowned as Canada’s leading cultural city, it is also home to Cirque du Soleil, which is currently touring Japan and other parts of the world.
The meeting took place across several venues. The main venue—a very interesting choice I must say—was Le Musée Juste pour Rire (The Just for Laughs Museum), which is, as its name suggests, the world’s only museum dedicated to comedies and humor.
So much for the introduction. The general meeting, led by Res Artis president, Mario Caro and the meeting’s executive committee chairperson, Bastien Gilbert (RCAAQ director) provided participants with the opportunity for mutual understanding, active exchange of opinions, and networking. More than 180 participants came from 20 countries across the world. The majority were from North America, followed by Europe. The rather small Asian representation included two organizations from Tokyo—Tokyo Wonder Site and Youkobo Art Space—and three organizations from Korea.
The next general meeting in 2012, scheduled to take place in Japan (Tokyo Wonder Site will be the host) looks forward to wider participation from Asian AIR organizations.

The substantial program of the three-day meeting included keynote presentations, sessions, exhibitions, networking events, and art tours of the city. A field trip for taking in Quebec’s art centers was organized on the last day.
The meeting’s opening day was a grand affair that doubled as the launch of Directory of Artist-Run Centres in Quebec and Canada. This book covers 161 organizations in Quebec and elsewhere in Canada. It is in its 7th edition now and has grown into a very informative guide to artist-run centers. A similar directory would be very useful in Japan, too. 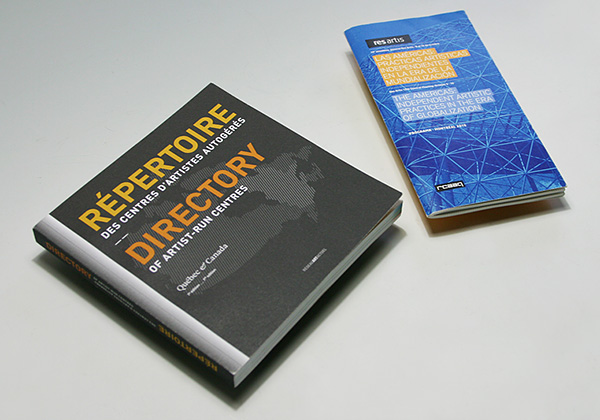 “Directory of Artist-Run Centres in Quebec and Canada” (left), and the program of the 12th General Meeting of Res Artis.

Keynote presentations were given by Joaquin Barriendos from Mexico, who is a visiting professor at the University of Barcelona, Montreal-born and based artist Sylvie Cotton, and Canadian writer and poet Nicole Brossard. Prof. Barriendos provided a unique insight into artists’ mobility and social phenomena from the point of their colony and non-colony associations. Ms. Cotton discussed the reality of residencies from her perspective as a Montreal-based artist and writer. Poet, novelist and essayist Ms. Brossard shared her experience as a writer-in-residence.
The daily program included three or four sessions running from morning till evening, which meant that the entire meeting had as many as 10 sessions in all, in which participants raised issues, engaged in dialog, and enthusiastically debated numerous aspects of AIR activities.
Many programs were offered in addition to the conference. These included an exhibition-opening reception at the Musée d’art contemporain de Montréal, an early-morning discussion at the headquarters of the Conseil des arts et des lettres du Québec, and tours of the city’s studios given by artist volunteers. Details of the program are also available from this general meeting’s dedicated website, so please take a look.

Res Artis board agreed that the next general meeting (world conference), scheduled for 2012, will be hosted by Japan. This represents a prime opportunity for showcasing and promoting the wide range of AIR activities currently taking place in Japan to a worldwide audience. It is also hoped that the meeting will set the scene for the development of a serious AIR network within the Asian region.
Hosting the meeting is also expected to help familiarize more Japanese AIR program providers and participants with the diverse range of residential art programs available overseas and the transnational activities of Japanese and overseas artists, which in turn will certainly encourage aspiring artists and art managers to more actively take part in such activities. To this end I feel that it is also necessary for us to think of ways to further increase Res Artis membership and improve recognition of AIR activities in Japan.
Residential art programs are carried out for and by artists, and through the programs it would also be possible to realize regional revitalization projects such as those involving community art and art tourism.
I look forward to ideas and feedback from readers of this article. 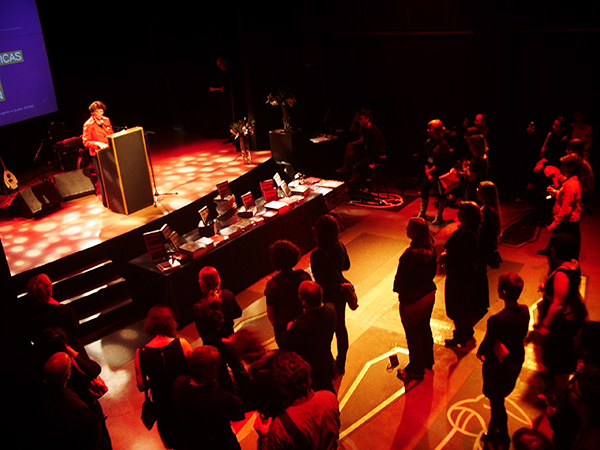 Poet Kay Barrett delivers a speech during the pre-opening event on October 6 at the Studio of Le Musée Juste pour Rire.

*1──The outline of Res Artis is as follows. Details of its activities and information on how to join can be found on their website www.resartis.org

History
Res Artis, Worldwide Network of Artist Residencies is an international network of more than 300 residential art program providers and others from over 50 countries. It was established in Berlin in 1993 for the purpose of making proposals regarding art creation and cultural policies, promoting the mobility of artists and stimulating artistic creativity through residential art programs. It holds a general meeting for improving its activities and for active networking approximately every other year, rotating the host country each time. The previous general meeting was held in Amsterdam in October 2008, in which seven organizations from Japan participated. Other General Meetings in the past include the one held in Sydney and Melbourne (the first in the southern hemisphere) in 2004, and in New Delhi (first in Asia) in 1998.

Activities
● Planning and implementation of residential art program promotion and other strategies for cultural and artistic activities
● Dissemination of information through its website and newsletter
● Implementation of support programs for residential art program management (ResSupport)
● Promotion of mutual understanding and networking between its members (biannual general meetings, regional meetings, joint meetings with other organizations, etc.)
● Activities are funded by membership fees and grants (from EU organizations, Dutch organizations, etc.)

Organizational structure
Res Artis consists of the membership and a board. Types of membership include general member, individual member and associate member. The membership fee is based on the member organization’s scale of operation. There are roughly ten board seats, and the most recent general meeting elected four new board members to fill vacancies.
● Mario Caro (US, president), Longhouse Education and Cultural Center
● Karol Fruhauf (Switzerland, treasurer), Bridge Guard Art/Science Residence Centre
● Tatsuhiko Murata (Japan), Youkobo Art Space
● Todd Lester (US), freeDimensional
New Board Members:
● Yusaku Imamura (Japan), Tokyo Wonder Site
● Leena Vutovesi (Finland), Kulttuuri Kauppila Ii
● Naomi Beckwith (US), Residency Unlimited
● Ika Sienkiewicz (Poland)
Nick Tsoutas (Australia) left the board because his term of office expired as of this general meeting. N’Gone Fall (France, interim secretary) and Marijke Jansen (Netherlands, vice president) voluntarily resigned from the board. During the board meeting held after the general meeting, Tatsuhiko Murata (Japan) and Leena Vutovesi (Finland) were elected to the vacant posts of vice president and secretary, respectively.