Towards a New Model of Arts Engagement

3331 Arts Chiyoda, based in Akihabara, Tokyo, is an independent initiative, opened in 2010, with the aim to support a new model of arts engagement beyond the existing gallery and museum system, connecting the general public and communities, in a new way, to the possibilities of artistic expression. 3331 offers a unique approach to creative practice, based on the site of an old school the centre provides over 4 floors of exhibition space, workshop facilities, meeting rooms, office space for arts organizations, independent galleries, café, lounge, roof top allotments and sports amenities. It is a unique model which invites people of all generations, backgrounds and interests to participate in its open approach to all disciplines of art 3331 offers various programs which encompass people with disabilities, children, local residents, students, experts and those with a curiosity for the arts. 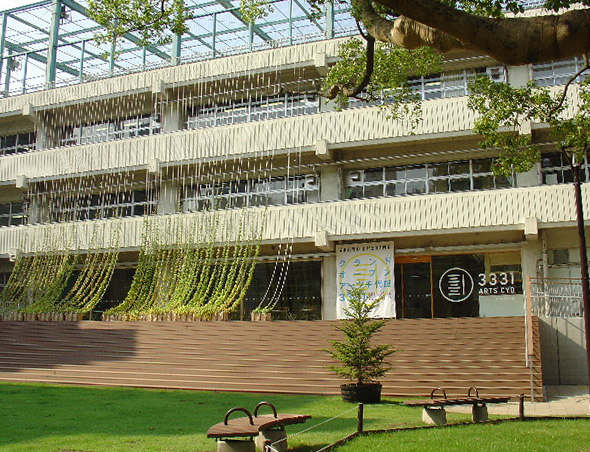 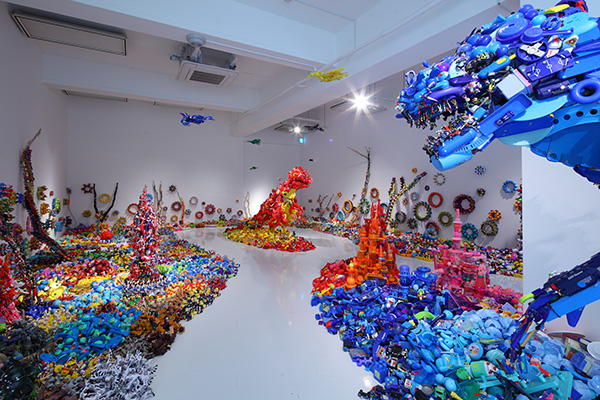 3331’s main gallery – with the work of Fuji Hiroshi

But 3331’s vision does not just end here. 3331 is not only an arts hub for Tokyo, but also for Japan and wider Asia itself. It is 3331’s objective to nurture a network of collaboration and support between creative practitioners and arts collectives, organizations throughout the region in the pursuit of new possibilities of arts engagement. The artist initiative commandN (instigators of 3331 Arts Chiyoda), has undertaken much research into the conditions of arts practice throughout Asia, experiencing firsthand the art scene in its various regions and building relations with many artists and organizations. Based upon these connections 3331 aims to raise awareness towards the local political, economic, cultural and social contexts of these regions and celebrate the rich diversity of art across Asia.

With this objective in mind 3331 aims to create a platform through which artists and practitioners may readily connect with each other and build relationships with specific localities around the region. This is to be realized through an artist in residence network which is to extend throughout Japan and various cities in Asia too. Starting with Akita, Himin and Okinawa, Korea, Taiwan and Singapore, 3331 aims to realize a system which will allow artists to readily engage in different areas of Japan and Asia. In pursuit of this aim 3331 is building a platform for both domestic and international artists who wish to visit other areas of Japan and will be able to connect artists directly with the art scene in a specific locality, highly improving the productivity of their stay and allowing greater ease of movement between one place and another. This is a key feature of 3331’s vision which is not limited to its base in Tokyo but dedicated to building links between art projects and organizations throughout Japan and internationally, distributing information on the local art scene in each area.

3331 is proud to be able to offer as part of its open residence program a new opportunity for creatives of diverse disciplines to engage in the vibrant art scene of Japan’s capital, with the potential to research, create and exhibit in the heart of the city. 3331 offers support to resident artists in all stages of their project, from its first conception, to final presentation. Provided with a studio space for exploration and production in a stimulating environment , with plenty of opportunity for creative and cultural exchange, located amongst other artist studios, galleries and workshop spaces, artists can here engage with visitors to 3331 through open studios, workshops and talk events and are given the opportunity to present outputs of their research and production in a dedicated gallery space.

Community + Communication – From the Global to the Local

In facilitating such a program since February 2010 we have considered the very definition and significance of what a residence is and the potentials of what it is able to become. It is of particular concern for 3331 that a residence creates a platform for experimentation, critical dialogue, community engagement and sharing of skills, ideas and experiences between creatives and wider publics. This is not just a case of the participating artist transporting their established individual practice to a new site but developing an informed response to the locality and joining in fresh research, encounter and exchange, which will not just benefit one individual but feed out into the city and its communities.
The program of course fosters a strong relationship between resident artists and the surrounding community of 3331 itself, providing a wide range of resources and support by which an individual practitioner is able not only to network within the art scene of Tokyo, but actually engage with local people and contexts upon a distinctly meaningful level. 3331 encourages connection with both of these communities, both the art community and the local community. These engagements are principally upon an individual level in which the artist is able to join in direct communication and form new relationships in a process of exchange which is highly enriching, and acknowledge the importance of such exchange and encounter of different ideas, cultures and contexts.

Last day of partying for the Air 3331 team of artists

Since its opening in 2010 3331 has welcomed over 20 artists as part of its artist in residence scheme which strives to bring artists from many different parts of the world into direct engagement with the community which surrounds 3331. Residencies have included the following artists and projects:

●Yoshiaki Kaihatsu, May-August 2010
Yoshiaki Kaihatsu was artist in residence at 3331 Arts Chiyoda for 3 months between May-August and during this time he not only created new work in specific response to Akihabara but also held a series of events and workshops along with an exhibition. The workshops included a series on how to make workshops for children, bringing participants’ ideas together and finally realizing their planned event at the end of the program. In the final workshop the participating children designed and made their own alien costumes and joined the alien tour of 3331. In his exhibition showcasing the results of his residence, Kaihatsu presented “Girlfriend” a documented record of a performance which takes the streets of Akihabara as its stage as Kaihatsu leads his “girlfriend”, a washing machine on wheels, with a tree growing from it, through the neighbourhood. A further work presented involved the contrast between two birds, one free to fly around in the gallery, the other caged outside on the veranda. During his three month residency Kaihatsu deeply researched the local area and consolidated this in his final work, while also actively contributing to the range of activities at 3331, clearly indicating the potentials of the residence program.

●AIR 3331, February/March 2011
In February/March 2011 we successfully realized the first of our AIR 3331 programs bringing together 9 artists/curators together from all over Japan and the Asia Pacific region in a 1 month residency in which each participant developed their individual work, while facilitating workshops and dialogues with local residents and visitors to the arts centre, finally consolidated in an exhibition in our main gallery. Highlights included a space ship for escape from apocalypse, built by Australian artist Ash Keating on the roof of 3331 using the various sports equipment remaining from the Rensei Junior High School, Singapore artist Jeremy Hiah’s interactive painting workshops with local children and the amazing feat of Fukuoka based artist Miyata Kumpei as he launched himself across his self made gym vault over two meters high. By bringing such a range of young artists from diverse areas of the region 3331 was able to instigate a particularly deep exchange between these practitioners and the Tokyo art scene, fostering new opportunities which 3331 is dedicated to developing in the long term.

●Sala Wong & Peter Williams, June 2011
Urban space represents a conflation of contexts: everyday life, history, politics, economics, law enforcement, urban planning, and the constructs of public and private spaces. In turn, a sometimes-contradictory mix of Official and Unofficial voices represents each of these contexts. How do these variously related and unrelated forces both inscribe, and are inscribed by, ordinary people?
Canadian media artists Sala Wong and Peter Williams have sought to investigate such issues through as many different experiences and opinions as possible. They hold that encountering a moment of change is also to encounter a moment of potential, believing it necessary to reflect upon this moment of potential by asking oneself “What Have I Lost” and “What Have I Found?”
This is a highly relevant consideration in the context of Japan in the aftermath of crisis. During their residency Sala Wong and Peter Williams engaged in a project which involved interviewing over 150 local Japanese people, asking two simple questions: “Please tell us what you have lost” and “Please tell us what you have found.” The participants were asked to make sketches representing each of their responses. In their final exhibition “Lost & Found in Tokyo” the lost and founds of 150 people were presented as an outcome of this project. 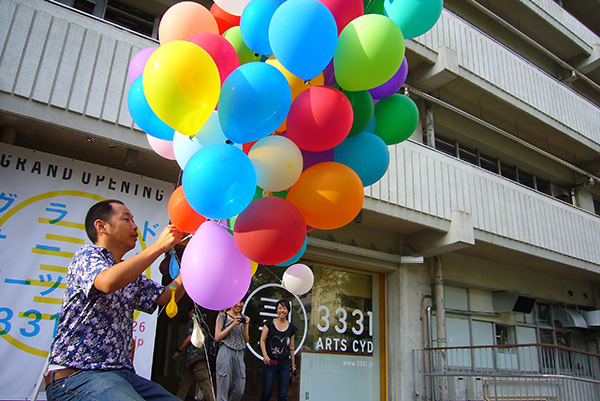 Workshop of Kaihatsu Yoshiaki “How to make an Octopus fly!” 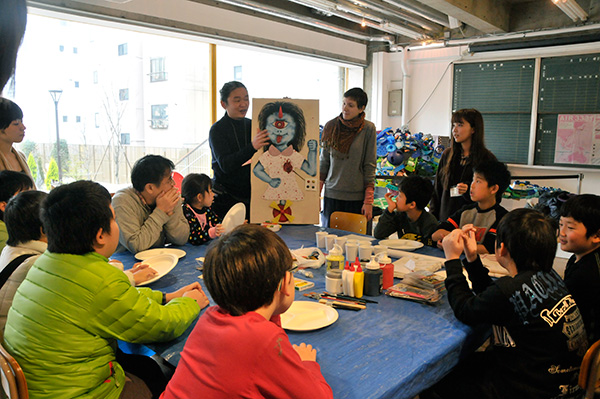 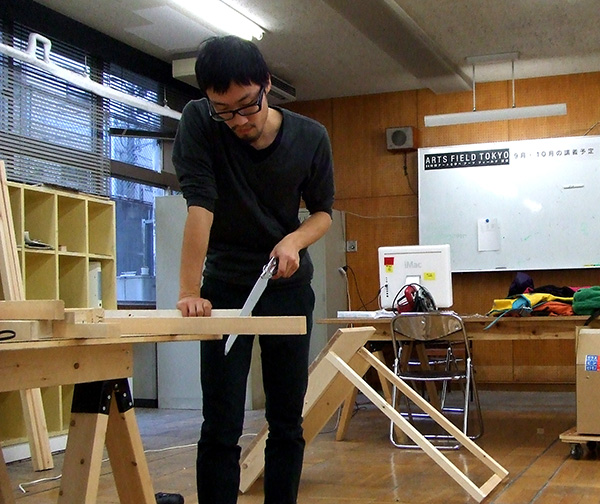 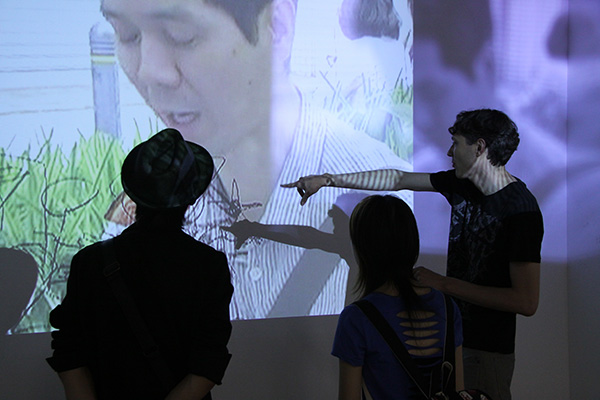 Installation presented in the exhibition of Sala Wong & Peter Williams

How should we develop the residence program from now on? Examples of residence programs such as Compeung in Chiang Mai, Thailand, provide an interesting model for artist engagement in the local area, as participating artists are encouraged to make a lasting contribution to the residence facilities and neighbouring surroundings by actually constructing further physical spaces (buildings) and structures from simple materials, leaving a legacy of each participant which can then be built upon further by the next. Without necessitating construction, 3331 is inspired by this idea that each artist joining a residency program over a significant period of time is able to form the building bricks of a development which continues to constantly grow and input into the community and the city itself. It is therefore important that each artist considers what they will leave behind, and how the next artist may take up the baton. 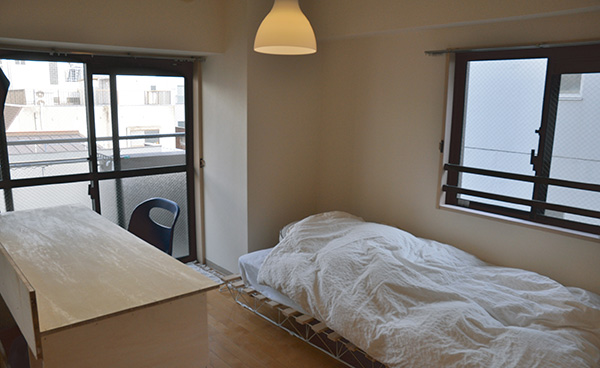 A view of one room of the residence accommodation facilities