AIR and I, 03: The Silent Dedication of Aomori

Currently I work and live in Amsterdam. Here in Amsterdam, when cold air and the distant cries of crows surround me, my thoughts go towards the woods of Aomori – to the deep wood scent, the sound of dry leaves crumbling as I walked through the woods behind my residency studio in Aomori Contemporary Art Centre. During my three month stay at the residency program of ACAC these woods and skies were where I found peace and relief.
Living as an artist means that there is something uncomfortable inside oneself. It is an abrasive situation. The ground that one is standing on feels slant and trembling, it is a constant feeling of anxiety, uneasiness and awkwardness. Even how, as I go through these moments, my eyes witness many things. And what my eye witnessed is left as a rupture in my heart. As Barbara Kruger once noted in her work ‘Your body is a battleground ‘, as an artist my body is a battleground. And the ruptures left in me inflame. They are answerless, suffocating hours. The only answer is just dive into the artwork (shut up and just make your artwork :）), or to go to places where you could work. For me it was ‘Aomori’. 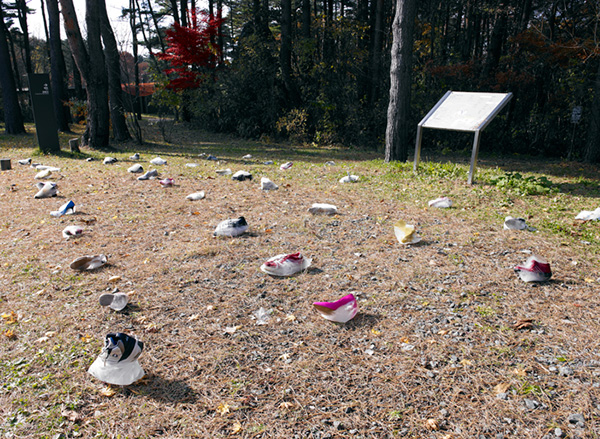 To go to Japan and do an art project was a sort of way of confronting my guilty conscience. To face the fact that I do not know the history of my country properly, and the reality that I have taken ‘daily life’ for granted. I was thirteen and it was 1983, there was an unforgettable scene I witnessed on the black and white television – the families of the victims’ of a civilian airliner Korean Air Lines Flight 007 which was shot down by Soviet interceptors over Sakhalin. Hanging on to a ferry over the cold Okhotsk Sea, melting into tears as they called out the names of who died, yellow chrysanthemums where scattered over the waves in commemoration… Why did they have to die without a word? 20 years later in 2003★1. I visited Soya Cape, the north of Hokkaido, where the Korean Air Lines Flight 007 incident took place. In front of me was the Okhotsk Sea which I saw on the black and white television, the deep dark Okhotsk Sea and the piercing winter wind. The victims of incident KAL007, they were still here in the ocean. It is then that I decided to bring back the voices of those nameless being and the voice of those that died even without the right to know why they died at the peak of the Cold War.
Even though, I have applied to Aomori Contemporary Art Centre as the artist residency program for this project, I was not sure it would be accepted. If I was to proceed with this project I would be discussing the Cold War and the delicate political issues evolving around it, and resurface the disregard memories and dreadful history that would rather be forgotten. How could I discuss this maelstrom like a historical incident, and how can I deliver this in Japan. I too was not sure.
Regardless of my doubts, I received the acceptance letter from ACAC. And finally I could start this project which I have kept close to my heart. As the passion rushed through my veins, I kept on wondering why they had accepted me. Why did Aomori reach out to this challenging project. 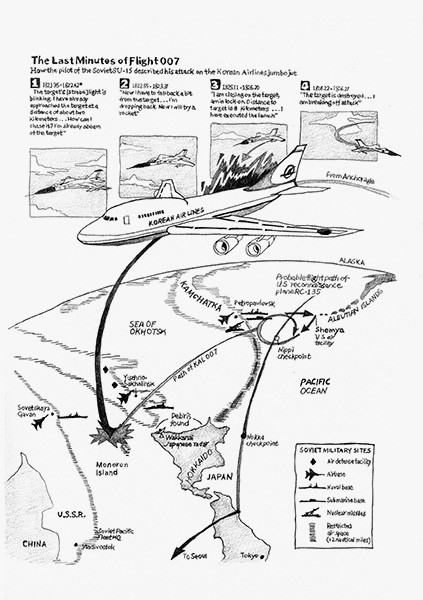 Once I had my work planned out, with the cameras ready to roll, I headed for my long trip from Amsterdam to Seoul, Seoul to Aomori. When I arrived at Aomori, ACAC curators, Yuki Kondo and Hiroyuki Hattori, employees/staffs of ACAC, a great technical advisor Kei Shii, many volunteers from Aomori city, and ‘shoes’ of the residence of Aomori were waiting for me – these shoes where the props to be used in the film. Because the project required more than 100 pairs of shoes, I had requested this need to the curator Yuki-san prior to my arrival and with the help of the residents of Aomori we were able to collect all 100 pairs. I have fought a lot for my work in many situations,… but as I stood in front of these shoes, which the residents of Aomori have collected for this foreign artist, it made me realize once again that it is the kind attention from my surrounding which fuels my work.
With a forest filling up my studio window I could quietly think and contemplate for my work in my studio. The common area (dinning room and kitchen) was a place where all the artists could cook and share food together and discuss ones arts and life. We supported each other, shared each others burden of concerns, and opened our hearts. Residency programs could actually make artist more sensitive due to stress and competitiveness, but the serene nature and fresh air of Aomori was healing the artists’ souls. 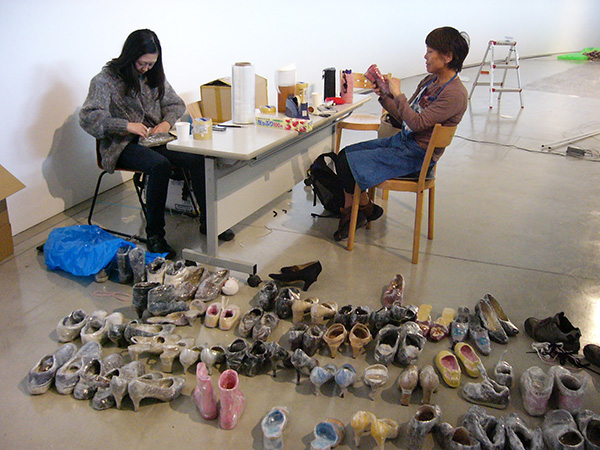 A volunteer of ACAC, Miyuki Watanabe (right) helped my work in ACAC exhibition hall. She has helped most of artists of residency program in ACAC
photo: ACAC

What I have planned to film in Aomori, were shoes floating in the dark night ocean which would take place from 3am to dawn. Although I have planned this for a long time, it was the main reason I had signed up for the ACAC, deep fear came upon me as I headed for the piercing winter windy night ocean with the filming crew. The sense of responsibility and fear hanging over me, I questioned myself continuously if my work was worth risking the danger lying in front of us. But, I had Yuki-san’s support standing right beside me.
As we drove up and down the shore of Aomori to spot a suitable location for filming Yuki-san and I exchanged many conversations. Yuki-san understood who I was as an artist and deeply respected my work. I asked her why ACAC had chosen my politically sensitive work. Her answer was simple and clear. She said reflecting the history and the past is ‘essential’ – especially for the young and upcoming artists in Japan.
Yuki-san had prepared everything precisely and meticulously. It was the beginning of winter, and the wind was thrusting. We carefully examined the ocean current, boat, sea route with the captain of the ship to prepare for the high waves.
We decided to film it at the sea by Hachinohe. We set the shooting date, and packed 100 pairs of shoes and filming equipment into a car and drove from Aomori to Hachinohe. In order for the shoes to float away, yet to prevent any pollution, we tied all 100 pairs together with fishing line during the night in the Hotel we were staying in at Hachinohe – I cannot thank enough Yuki-san and the artist Tomomitsu Tada-san who helped my project for doing this work for me. At 3am, more than 100 pairs of shoes were tied with fishing line, cameraman Sawaya Kenji, staff and I got on to the boat and headed out for the Pacific Ocean. The horizon was the only thing visible of the black Pacific Ocean where the harsh, dark and soundless wind was blowing. I said a prayer for those who had lost there lives at the 1983 Korean Air Lines Flight 007 incident. This was a malicious attack towards civilians at the peak of the Cold War. The innocent souls were still floating in the Pacific Ocean. These drifting souls were brought to surface by the ACAC Artist in Residency Program and the dedication of the residents of Aomori in Japan. 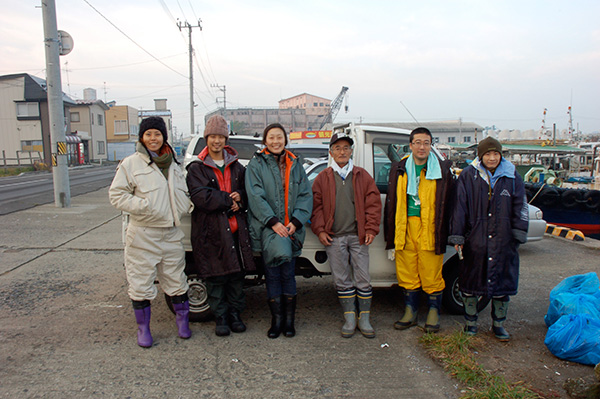 The work produced at Aomori were display at the ACAC Exhibition Gallery designed by Tadao Ando. All artists installations were done with the precise planning and help of the staffs of the ACAC residency program and the volunteers of Aomori city. Once again it struck me how a work of art is not completed solely by only the artist him/herself. As I write down this text, the face of Kei Shii-san, the ACAC technician who always moved around the exhibition hall efficiently to help with all parts of the art installation, and his conscientious and earnest face comes to my mind.

Now I went back to Amsterdam to my everyday life with the memories of the bleak yet fervent Mt. Osore, the aromatic scent of chrysanthemum, and the supportive help of the Aomori people. As I observe the reality of my present with an uncomfortable and keen view I was able to concentrate on my life and work. As an Asian artist working in Europe I find difficulties communicating through my work, and most of all find that history is accepted in quite a different way between Europe and Asia. Sometimes I just blankly stare at the wall at a loss. Some days I feel like I’m slowly crossing the edge of a cliff, unable to look back or look down but only hardly proceed in my work. My drive and vision of art slowly wear out, but I tell myself ‘remember the people who supported you in the middle of the dark winter sea. The silent dedication of Aomori…’ The memory brings affection to my exhausted enthusiasm, just like the moments when the black sea brought fear and peace. There were the memories of Aomori. The silent dedication of Aomori lives within me. 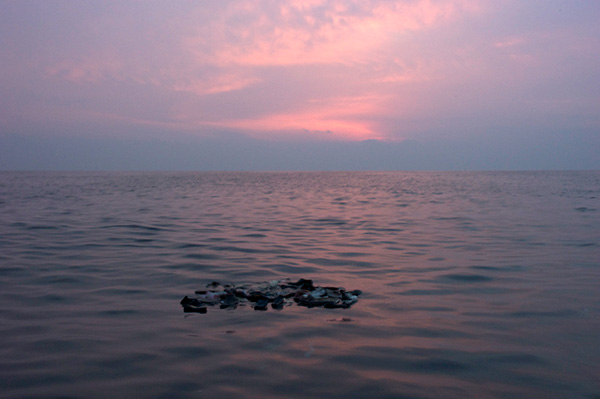 ★1──In the year 2003, I was accepted at S–Air residency program for three month in Sapporo, Hokkaido.

The Aomori Contemporary Art Centre (ACAC) opened in December 2001 as a facility for artists in residence. Over those 10 years, around 100 artists from 25 countries have participated to our programs. Artists are nominated in spring and selected from among applicants in fall. During their 2 to 3 months’ stay, they create, present and/or exhibit their works and participate to various exchange programs.
The relatively large size of the facilities and the spatially characteristic gallery space is what typifies our residence program at ACAC. It seems that this gallery designed by Tadao Ando is sometimes challenging artists. Compared to a museum, it is much smaller, but for artists, the exhibition in this gallery means more than simply presenting the results of their stay and plays a large part in the program.
Interaction and collaboration with many different people as a requirement for joining the program is another characteristic. This is because ACAC is not only meant to support an artist’s creative activities, but also to provide viewers with a wide variety of artistic experiences, including exhibitions, lectures and workshops. This seems all too obvious for a public cultural institution nowadays, but looking on the bright side of it, one can expect that such encounters between artists and viewers or society at large make new creations on both sides possible. At times, this helps artists create something more easily in a different place or gives them access to remote places that they would never have suspected as tourists. There are several processes that assist the creative process of an artist: shooting, translating, giving directions, wrapping shoes in plastic film, connecting shoes with fishing line, etc. As none of those processes require artistic education or technique, anyone can perform them and therefore many different people can get involved.
Viewers can actually witness artists in their creative process; appreciate the fruit of their imagination where it was created; ask them directly about their interpretation of it. We believe that this kind of interaction can broaden interests and interpretations of various artistic expression forms. On the other hand, we hope that encounters with other artists, local people, their culture and history will give artists clues or new ideas for their creations. Providing a place for collaborative creation and free communication, we would like to continue acting as a center for unrestricted intellectual exchange taking in and conveying multilayered ideas. 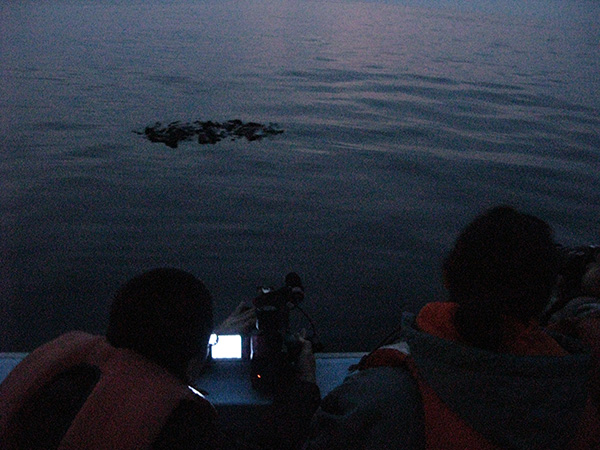